”We are running late”, ”we need to delay” or ”we are over budget”. If you have worked in projects you have probably heard these phrases many, many times before. But what is the cost of delay? I read a very interesting article about that. In the article a way to calculate the cost of delay is described. I’m working in a product development company so cost is pretty much already set for us, ”this is the team and number of people assigned to work with the product”. Time is also to a very large extent also set, since we have time plans to follow for the releases of the product. The only thing left to be variable from the Iron Triangle is scope.

”The shrinkage factor” from Seinfeld 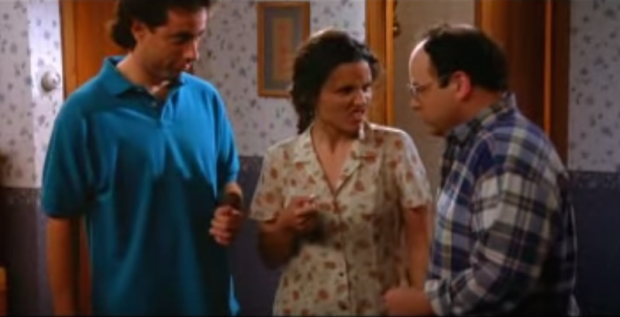 I think many of you remember the sitcom Seinfeld that ran on NBC during the 90’s starring Jerry Seinfeld, George Costanza, Elaine Bennes and Cosmo Kramer. In the 85th episode called ”The Hamptons”, the following happens (information taken from Wikipedia):

The four principal characters travel to the Hamptons to see a baby; they find that the baby is altogether ugly. While on the beach, Kramer finds a filled lobster trap and thinks the catch is his, unaware that it’s a commercial lobster trap. George’s girlfriend goes sun tanning topless while he goes out to get tomatoes, and George is seen naked by Jerry’s girlfriend Rachel, to whom he tries in vain to explain that, having just gotten out of the cold water, he is a victim of penile ”shrinkage” by yelling “I was in the pool!”

More according Wikipedia – The episode has been credited with giving “new meaning to the word ‘shrinkage'”. Seinfeld writer Peter Mehlman took credit for introducing the word, with apparently enthusiastic approval from Larry David (co-creator of Seinfeld together with Jerry Seinfeld).

Have you watched the hilarious YouTube clip yet? If not, please go ahead and do so before continue reading. Finished? Now I’ shall try to give the shrinkage factor a new meaning in the context of agile.

The Shrinkage Factor (TSF) represent the scope decrease in percentage for every time unit of project delay.

This definition resonates well with the one that I found here. Let me provide a simple formula together with an example. The simple formula:

An example, using the mentioned values from above:

Meaning for each week of delay the scope of the project has to be reduced with 5%.

TSF is now something I have in my toolbox to be able to communicate to my project stakeholders the impact of delay. Everybody logically understands that given a shorter time you can complete less work, but to have a hard value on it is of course even more pervasive! I hope you find this blog post amusing and that you put TSF in your toolbox.

All the best,
Tomas from TheAgileist